Among the locations are 10 sites in Florida, and four new-format stores

Natural and healthy grocer Sprouts Farmers Market will open approximately 20 new stores this year, including four with a new, smaller format and one store relocation, the company announced on Friday.

Among the openings are 10 stores in Florida where Sprouts has been growing rapidly since 2018 and currently operates 23 locations. Stores in Dania Beach, Fla.; Grand Prairie, Texas; Phoenix, Ariz.; and Smyrna, Ga., will introduce the retailer’s updated, smaller format averaging 25,000 square feet, and one store in Tustin, Calif., will be remodeled this year with the new layout. The first ground-up new-format Sprouts store (as shown in rendering above) will open in Phoenix later this summer.

“This year, Sprouts will densify its footprint with more stores opening in California, Florida and Texas,” said Dave McGlinchey, Sprouts’ chief format officer. “We’re excited to introduce our newest format in four stores in the second half of 2020 and plan to feature this format with even more stores next year, when we will be expanding at unit growth of 10% or more.”

In an earnings call on Feb. 26, Sprouts CEO Jack Sinclair commented on Sprouts’ growth plans. The retailer, which operates 362 stores in 23 states, opened 22 new stores in 2020 even with the pandemic raging across the country.

For 2021, Sinclair said, “As we look through the year, we will remodel an existing store with parts of the new format early in the summer and our first ground-up new store format will open later in the summer in Phoenix.” 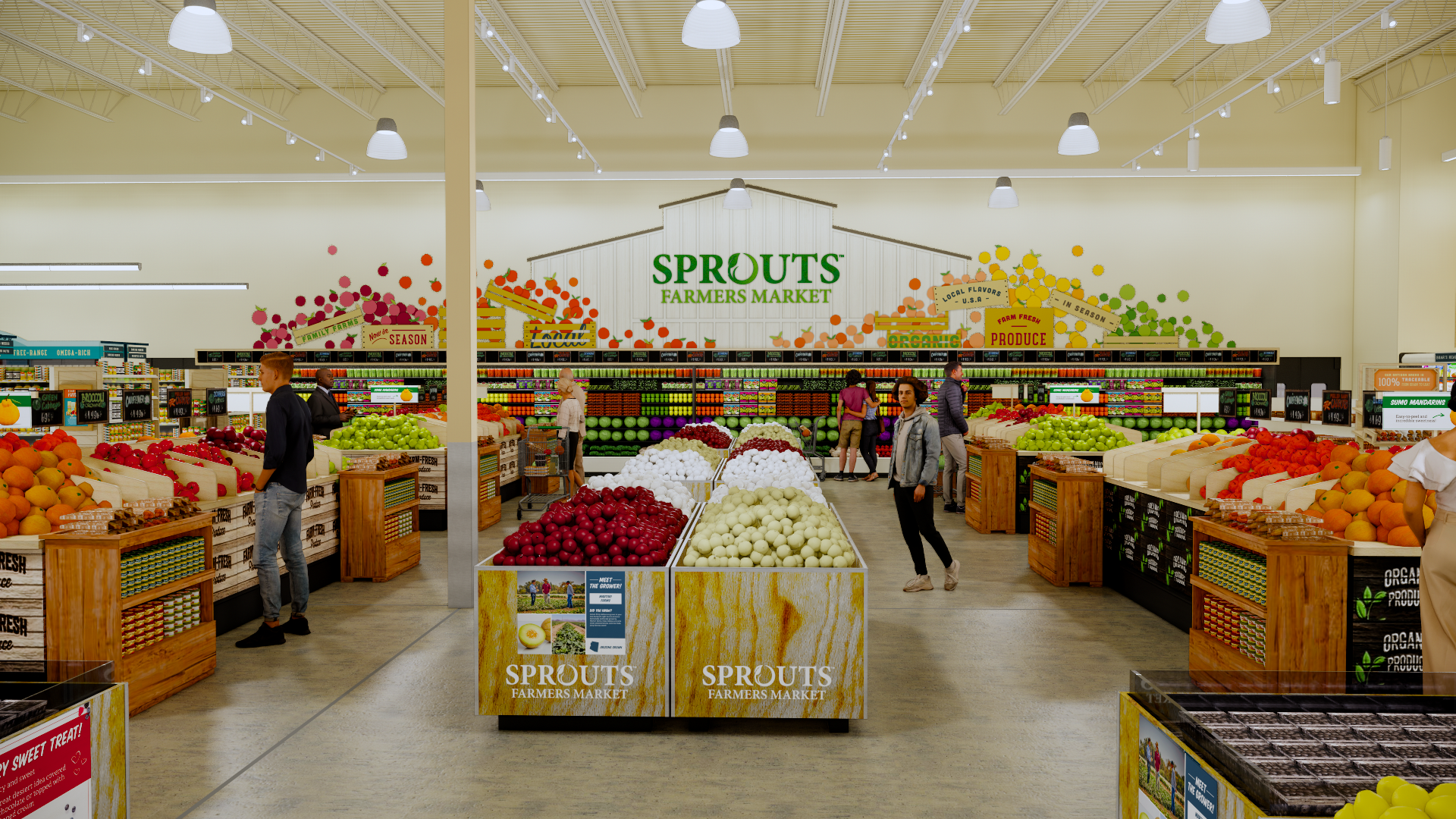 As seen in this rendering, the smaller size of Sprouts’ new store formats keeps produce at the heart of the store while maintaining the retailer’s familiar open layout.

Friday’s announcement listed the locations for the new stores:

“Our refreshed format highlights the unique experience Sprouts is known for while emphasizing product innovation, attributes and departments meaningful to our target customers like high-quality meat and seafood, frozen items and plant-based products,” said McGlinchey. “The smaller size is very efficient and keeps produce at the heart of the store while maintaining our familiar open layout that will offer more assortment of products for a treasure hunt shopping experience.”

Sprouts will also open two new local produce distribution centers this year, one in Aurora, Colo. in March and another in Orlando, Fla. later in the year. The new centers will drive supply chain efficiencies by positioning stores within 250 miles of the centers.

“We generated a robust top line with sales up 15%, record earnings and operating cash flow of nearly $500 million — while absorbing costs associated with an increase in e-commerce sales, the opening of 22 new stores and the payment of record bonuses to frontline team members,” said Sinclair.