Deli-prepared food purchases and trips on the rise, FMI reports

Deli prepared foods sales totaled $31.3 billion for the 52 weeks ended Aug. 27, up 9.3% year over year and 19.2% from the pre-pandemic 2019 period, according to NielsenIQ data cited in the FMI Power of Foodservice at Retail 2022 report, released Tuesday. On a unit sales basis, deli prepared foods edged up 2.4% year over year and 7.2% from calendar year 2019. Pizza, in particular, turned in strong results, with dollar sales up 16.7% and unit volume up 20% over the 52-week period. Overall deli sales climbed 12.3% to $47.9 billion in dollars at 3.7% in units for the 52 weeks, up 20.9% in dollars and 8.3% in units from 2019. FMI noted that the robust deli and deli prepared performance came as most fresh departments saw unit sales decreases during that period.

“When you look at most of the fresh categories, they are up in dollars. But that is being primarily driven by inflation. Our members enjoy the benefits of the increased dollars, but the worry is the volume wasn’t there,” Rick Stein, vice president of fresh foods at FMI, told Supermarket News in an interview. “When we look at foodservice, the volume and the dollars were up not only year over year but versus pre-COVID, which is more significant.”

Grocery store foodservice has benefitted, in part, from the lingering food-at-home trend, according to Stein. While the momentum has swung back toward restaurants as consumers have felt safer returning to public activities, many also have retained their preference for eating at home due to habits generated during the pandemic, hybrid work environments and high menu pricing at restaurants, he explained. 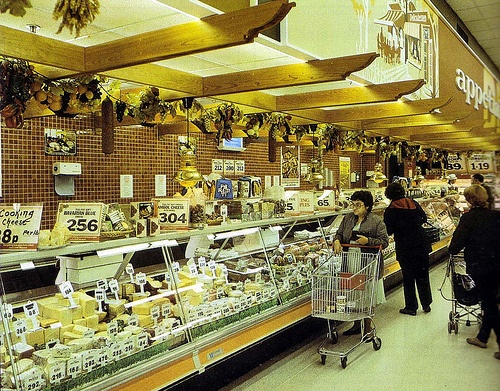 “Convenience and value combined lend themselves to eating more at home. So although foodservice [at restaurants] has reopened and there is a good segment of our population that’s going out to eat, every time they get the check, they’re realizing how expensive that is,” Stein said. “So I think that drives them to think about maybe a few less occasions eating out and a few more at home.”

The extended food-at-home trend also exposed many shoppers to all of the foodservice options at the grocery store as these operations have reopened.

“The way customers learn about what’s available comes more from in-store shopping, as they walk around the store,” said Stein. “They really became aware of all the offerings as they were doing more shopping for home. So I think it all sudden started to get on their radar that there were options for them at the foodservice delis.” 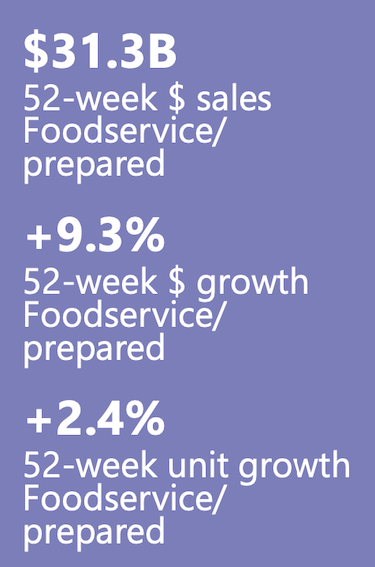 That has become a part of weekly planning for meals at home. Of grocery shoppers polled, 21% said they prepare seven or more dinners at home per week, up from 16% in 2021 and including food made at home, semi- or fully prepared items and leftovers.

“What happened is consumers started seeing the economic value of cooking at home. But you’re still talking about 50% of the consumers, and 49% are telling you that they’re using the foodservice at retail to complement or accessorize their total meal,” according to Stein. “So maybe they’re buying the salad, a side dish, the main protein or the rotisserie chicken and then going home and combining it with other things. But I still think that’s playing into their game plan.”

Midday and late afternoon are the top times of the day for these purchases. And while most deli prepared foods are bought as part of a regular grocery trip, 18% of shoppers make special trips for these items, FMI reported.

“Retailers have done a really good job of highlighting all the options, hot and cold, grab-and-go foods, etc. When you’re a more frequent shopper, you see those options, and that could be your only reason for the trip,” Stein said. “You could be at home and deciding to go to the local supermarket to pick up something for lunch or something quick for dinner. And that’s increasing your trips because you’re not going to buy four days’ worth of foods that you want to consume that night. You’re probably just going to buy for that day or for that particular meal. So that’s why you’re probably seeing the trip frequency equaling more purchasing.” 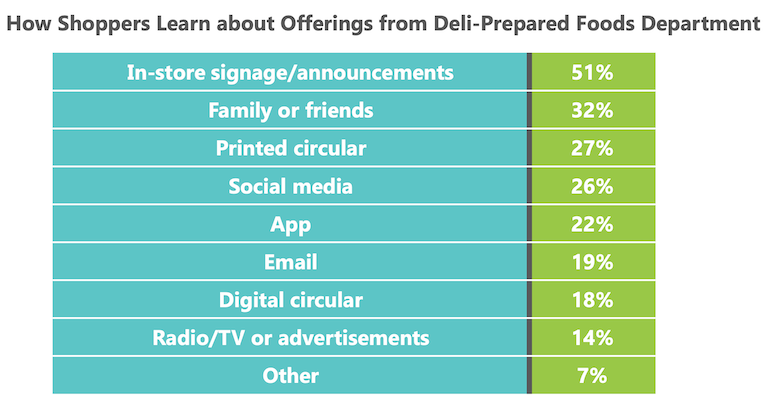 More often, grocery deli-prepared meals replace a home-cooked meal (42%) than a restaurant meal (17%), and a third of grocery shoppers reported that deli prepared is an impulse purchase most of the time.

Still, FMI noted, there are key opportunities for grocery foodservice. A quarter of shoppers usually opt for deli prepared options, even though restaurants are the most popular solution (39%) for shoppers who don’t feel like making dinner themselves. Fifty-three percent of consumers said deli prepared foods are a good value versus taking out from or eating at a restaurant. And 43% of shoppers said a big reason they buy from a restaurant versus grocery deli prepared is they don’t think about it and the latter should be better advertised.

Half of the FMI survey respondents indicated the ability to order ahead — from a mobile app or online — and have an inside pickup station for pre-ordered food would drive more purchases deli prepared items. More creative approaches, too, would spur deli foodservice purchases, including vegetables/healthy options (cited by 58% of grocery shoppers), heat-and-eat sides (57%), meal deals/bundles (56%), total meal solutions (55%) and heat-and-eat holiday meals (27%). Over half of those polled also would be interested in “featured days” such as “Taco Tuesday” or “Pizza Friday.”

“We are trying to tell our members that you need to think, look and act like a restaurant when it comes to marketing your foodservice,” Stein said. “You need to have the technology that goes with it. You have to have apps so that customers can go to their phone, place an order and pick it up curbside. You need to think differently than just putting it in your print ad on page four. Perhaps you’re buying a billboard, perhaps you’re doing a TV or radio commercial that’s just talking about your foodservice at retail. So we think there’s still a lot of work to be done, but the leading lights are accomplishing it. It’s out there for the taking.”